Skip to content
snowflakes that stay on my nose and eyelashes 😍
dashing through, one horse, etc.
professional mane sniffer over here ✋
A whole week of nothing but smiles and great rides on green grass under that big Montana sky. One million thank yous to @jenniferwootenmacouzet for getting us there. Speedy - let's do it again next year.

Unrelated foreword: I am experiencing my first mystery pony health issue.  Murray walked off the trailer yesterday (he spent the weekend at my trainer’s house to make space for some horses sleeping over for the clinic, and ideally to do hills but then it poured for three days) with a puffy left knee.  It’s not hot, it’s not painful, and he’s not lame, it’s just…. bigger and squishier than it should be.  There’s no puncture wound or kick mark or bruise even (no painful spots, that is), so our best guess is that he just bumped it on and now it’s swollen and stocking up thanks to being stuck without turnout for the last two nights.  So I’ve been hand walking and lunging to get the blood moving and try to help the swelling go down, but avoided riding in case he trips.  Tomorrow I’ll ice it, but I refuse to cold hose in a drought.  If you happen to have any suggestions on this front, let me know!

Saturday night we went out to dinner with Hawley where she revealed to us how much she loves eating (a lot) and how she got into eventing (because her dad said she’d never make the Olympics with horses!).  Hawley also told us about Hank (Livingstone), her first advanced horse, who ran advanced for 11 years, and some of the practices she used to keep him sound for all that time.  One thing she suggested was ice and bute after every jump school, just to help keep things cool and tight in the tendons.  She also talked about presentation at her barn.  Hawley believes that everyone should be turned out well at all times, and pointed out that even though she didn’t always have the nicest tack or horses or outfits, sponsorship companies have approached her for a long time because of the way she presents herself.  As someone who is moving from dressing pretty slap-dash for riding to trying to be a bit neater and more presentable on the every-day, this was definitely good for me to hear.  And she was just as lovely, funny, and friendly at dinner as she had been in lessons!

Sunday dawned with pouring rain and a new course in the indoor, but Hawley was chipper as ever despite the change from her usual southern California climes.  Instead of the circle exercise, Hawley had set bending lines crossing the arena, which walked out to 4 or 7 strides.  One of these lines started with a one-stride grid dead-center in the arena, which meant a tight 12-meter circle to approach it properly.  There was also a faux-ditch and coffin complex set just three strides and a 90 degree right turn from one of the skinnies.  Hawley added placement poles before and through the grid to get riders keeping that consistent canter, because evidently horses (and riders!) tend to want to rush through grids.  We pulled out some of the lookier jumps and filler to give horses and riders a bit more of a challenge and there were way more refusals Sunday!

Hawley also presented the horses to a skinny fence (a 4-foot flower box and one of our broken poles atop it) and had all the riders do the same thing for the first presentation.  Riders trotted down to the box, walked, and halted all with good contact.  Then they had to reinback a few steps, halt again, and turn sharply away.  Hawley said that this does several things: it gives your horse a chance to look at the jump if they need to, puts you in the upright, halt position you need to jump a skinny, and doesn’t show your horses the runout option because you don’t turn them away from the fence.

Once again, everyone really had to focus on striding and pace in the exercise, and Hawley insisted on good turns and full use of the arena.  The riders started out with easier exercises, riding the easy four from the grid to the skinny or the seven from the skinny to the oxer.  Then things got interesting – Hawley had riders make eight strides from the oxer to the skinny specifically so they could turn right into the coffin in just three strides.  Out of the coffin they had to rollback left, and pick up the pace to make seven strides back from the skinny to the oxer.  Hawley could tell immediately if a horse’s canter was too big or too small to make the striding she wanted, and encouraged riders to make changes early, in particular adding energy to the canter so that they had something to package later.  The last, and most challenging exercise, was a twisty course from the blue oxer, three strides to the skinny, three strides to the coffin, then a left rollback and back from the skinny to the oxer.  Once again, Hawley insisted people “make it happen!” 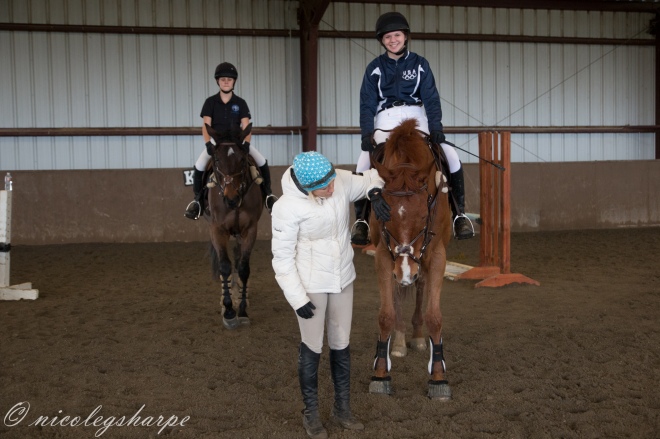 Hawley and her favourite horse of the weekend!

While these exercises weren’t necessarily ones you will have to deal with in stadium or cross country (at least not at the lower levels!), Hawley pointed out that it’s extremely valuable to have the options open to you.  You should be able to add or leave out strides if you need to, ride a good corner or cut it and stay balanced, and make tight turns when you need to.  You need to know when to balance the canter up or stretch it out, and how to approach different types of obstacles.  In one of Hawley’s early training sessions with Buck Davidson, Buck had all the riders ride entire courses in counter-canter instead of asking for the changes.  It forced all the riders to stay really still as the upper-level horses would change immediately upon feeling a shift of weight, and fascinatingly, none of them had rails.  Because the change encourages the horses to lengthen the canter, it was more likely that the horses would jump flat after a change, on the counter canter they could regulate their pace better.

Runouts  are your fault, stops are your horses fault.

If you need to compress give yourself some energy to package first. If you package too early and run out of energy then you’re going to think oh crap and push at the end.

Oh, and my favourite Hawley tidbit?  If your horse can buck, he can jump.  If he can get his feet five feet up in the air, you know he can jump that high.

Thanks so much for an amazing weekend, HB!