Well, I’ve got to hand it to our assistant trainer. She makes some interesting, challenging courses for indoors in the winter.  The twisting and turning is not my fave. Not my fave.

This week’s jump lesson featured me flailing more than slightly, throwing myself WAY ahead of Murray once, and my horse honestly, kindly, and genuinely proving that he is better than I am at stadium.

I was fairly worried about the first rollback, as you only really had two strides dead-on to the oxer after the turn.  And I’ve never really asked Murray to make such a crazy turn to a jump before.  But he took it like a pro, and I tried out a couple of different angles of approach.  In the end, it was easier to kinda let Murray turn himself than to fight with him about getting deep in the corner for a straighter approach. Murray does this regularly when he has already memorized parts of a course, which is good, but also bad as it also means I’m not riding as well or properly.  But in lessons, I don’t really know how to combat that without a fight, since we typically jump the same lines a bunch of times.  Certainly, I can insist that we do things my way, and when it’s necessary, I do.  But if it’s not a big deal (as in this case), it’s just easier to let Murray think he’s running the show (or continue running the show, as the case may be).

The red diagonal also worried me at first because it looked super steep coming off the wall, but Murray was like “no big”.  That is the jump I kinda completely threw myself at one time, as I pushed Murray for the long spot  but he chipped.  And by “pushed” for the long spot I mean I saw a longish (but still good!) spot and said “GO” and threw myself at it, but Murray was like “noo, hoomin, we getting deep”.  I managed to avoid doing that again.  On the topic of adjustability, we managed to get 3-3 in the 2-2 line twice, and then get back to 2-2 so that was nice (but it wasn’t intentional the first time, and the second time I saw it would be shitty and just held for the three, and it was kindof a long two anyway).  I’m not sure it counts as adjustability if it’s an accident….

Overall a good lesson but plagued by little issues that made me feel like I was a total spaz.  I was riding in my show boots (taller and tighter than my everyday ones) because I left my others at my boyfriend’s house, and my saddle was kinda slick because I did a shitty job of cleaning it last week.  This resulted in me being a touch uncomfortable, realizing my boots still need more breaking in, and generally being kinda all over the place.  I couldn’t seem to get my right leg under me properly to push Murray off it, so the right-handed rollbacks and tight turns were tough.  Murray was leaning his body in through the turn, and I kept leaning my body out to the left, which is not really an effective turning strategy.  Part of this was because I know I have a tendency to lean into my right stirrup, so was trying to overcompensate and fix that habit by leaning left.  Instead, Alana told me to pick up my right shoulder and stretch up through that shoulder, as it’s because of my shoulder collapsing that I lean like that.  TL;DR – wear my show boots more, clean my saddle properly, pick up my goddamned hunchback right shoulder, and lean into the turns to pick Murray up through them. 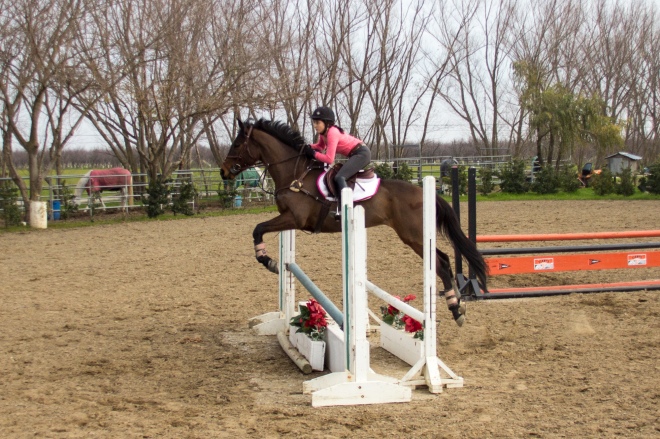 You can actually see my right shoulder is forward/torso is twisted slightly left in this, which is BAD… (though this is not today’s lesson, and I actually think the problem has gotten worse since this day).

As honest as he is (and it cannot be said that Murray is not honest), I’m finding myself a little dissatisfied with Murray’s and my jumping right now.  I’m struggling to put my finger on it, but I think it has to do with the super deep spots and then resultingly shitty jumps we get to so many fences.  I am seeing deep spots, that’s for sure, but I’m seeing them deep because I feel like we’re not maintaining true “forwardness” to the base of the fence.  Instead, each stride gets just a little smaller and just a touch backed off.  I’m not even sure this is noticeable to normal people, but it is not the forward attack machine I’ve had in the past.  Maybe it is the attack machine and this is the more careful, smarter version of it?  I also feel like he’s jumping like a downhill horse, which he isn’t, exactly, though he can certainly be very downhill at times.  And I also feel like the middle zone of Murray’s butt muscles just refuses to fill in, even though we’ve been using ourselves more and working and jumping and ugh! just so much feels.

Whatever.  I will jump this weekend to see what’s going on, and probably Sunday I’m going to trailer to my trainer’s new house (which is also a small horse property!) to do hills.  That will build his butt up for sure.

HILLS! I am so glad we have access to them finally!!