I try not to publicly ridicule anything, as I attempt to live by the internet motto “tweet as you would like to be tweeted”, but every once in a while something comes up on the horsey internet so ridiculous that I’m simply incapable of keeping my mouth shut. When this happens, I’m going to feature it in this segment, Mockery Monday.

Our first Mockery Monday is directed towards the backlash directed towards helmet-wearing and #MindYourMelon style campaigns. I know, I know, the helmet issue is a dead horse that we’ve beaten repeatedly, so I’m going to try to stay off the soap-box on this one and keep it to cuttingly accurate critique of these pathetic excuses for “evidence” as to why wearing a helmet is “pointless”. Normally, I let the helmet issue slide for anyone outside of my direct realm of contact – natural selection needs someone to act on, right? – but when people are actively campaigning against safety and the greater good, I just can’t (won’t?) keep my mouth shut. 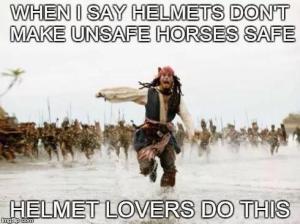 At its core, this statement is, in fact, true. The act of putting a shell of plastic and styrofoam upon your jello-filled dome does not make the 1000+ lb animal you are about to sit on for sport a safer creature by nature. That would rely on some kind of transitive-property-of-safety-creation that, if it actually existed, would likely be much better enacted by simply putting the safety-creating helmet on the horse’s head. Or butt. Or wherever. This straw man argument is essentially the same as telling drivers that wearing a seatbelt doesn’t make driving safer (if you believe that, you are welcome to a glass and asphalt facial any time). Putting a helmet on before you ride makes the act of riding safer, or, more to the point, it makes falling (or turning around to look back and see if your horse is doing a true haunches-out and banging your head on one of the support beams of the indoor arena) safer. Additionally: head wounds bleed a lot so you can avoid a lot of clean up, and protect probably the most important part of your body, with a tiny piece of equipment. If you’re the one who came up with this argument, it’s extra important that you protect whatever you’ve got left. 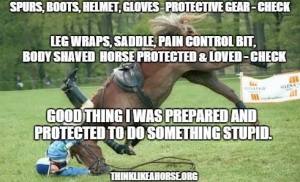 This argument – if you can even call it one – hardly makes any sense anyway, so I might be adding a little creative interpretation to it right now.  I feel that if your argument makes zero sense I’m free to interpret it at will. But basically, what I believe it to say is something along the lines of “you take all these precautions to protect yourself and still something terrible can happen” which I think is actually the argument for wearing helmets. The caption on this facebook page says that “helmet pushers are like drug dealers” and that we want you to get addicted to the feeling of wearing a helmet because it covers up your fear. Uhhhh… sure, it may physically cover the emanations of fear evaporating from your scalp, if that happens to you (are you a human? I think probably not, then) but for most of us it’s to cover a soft, thinly-encased ball of ridiculously important sludge from the hard ground, or the hard, hard feet of our valiant steeds*. 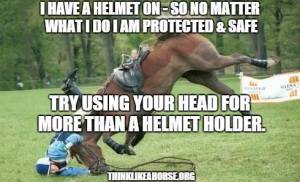 Ditto this argument. Nobody actually thinks that they are protected and safe no matter what they do when wearing a helmet. That’s not how this works. That’s not how any of this works. In addition to suggesting that we helmet-wearers are drug pushers (the drug of life and safety), they also suggest that we push the agenda that “horses are unpredictable”. Guess what? All animals are unpredictable – in good ways and bad ways. It is pure vanity and arrogance to think that any humanoid can understand any other creature so well as to make them completely predictable – unless you have a mind control ray, of course – and is the mistake that leads people to getting their friends’ arms ripped off by their chimpanzee “children” (another behavior I am vehemently opposed to).

Now, this is not to say I’ve never gotten on a horse without a helmet, and that I never will in the future. I’m a vain bitch and I like a nice free-flowing-hair-barefoot-and-naked-galloping-on-the-beach picture as much as the next girl. However, outside of those particularly stringent conditions, you’re probably going to find me wearing a helmet whenever I’m on my horse, and fairly frequently when I’m around him, because that kid is unpredictable as fuck and I value my life, ability to make money, and cerebellum.

This concludes our first Mockery Monday. With any luck, I’ll never need to mock anything again, but given that it’s The Internet I find that hard to believe.

* Steeds not made safer by the donning of a helmet.