Equestrian Journey is hosting their first ever blog hop!  The question is: what will you NOT do?

This is funny.  I’m a really fussy, particular person, especially when it comes to Murray, so it’s hilarious that I can’t really think of things I won’t do with him, or horses in general.  Though now as I write this, I am thinking of a few things that Murray has taught me to do (or perhaps simply reminded me are characteristics of good horsemanship).  Writing this, I’ve thought of a bunch that are pretty standard: I won’t ride without a helmet, and I won’t teach my horse to rear, he doesn’t need the excuse. I probably shouldn’t ride without a vest, but I still have a little vanity.  I won’t run or yell around Murray or other horses — SURPRISE! — yes, this is simply a face of good horsemanship, but I find it can be ignored when surrounded by really rock-solid horses.  My horse is not rock solid.  I do not do these things around him or others. I won’t stop my horse from peeing in the barn aisle.  Why would anyone do that? So mean. Let the pony pee and deal with the clean up after.   I won’t listen to music while I ride, and I won’t make excuses for myself trying anything other than my hardest. 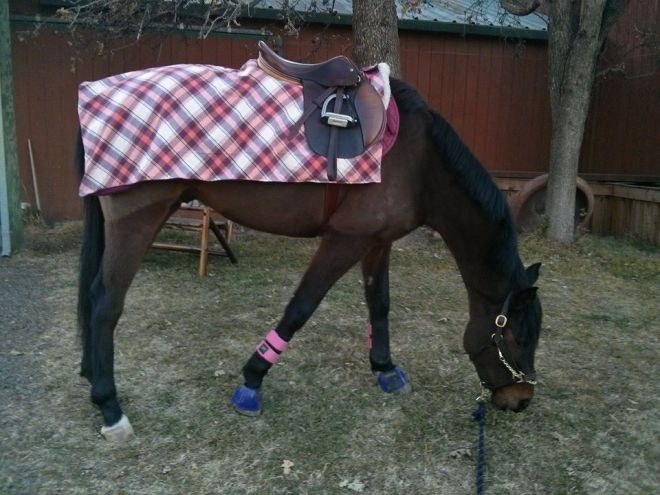 So fussy that I made my own quarter sheet when I couldn’t find one to match my specifications.

Here’s one that might be a little off from other equestrians: I won’t put my horse into training where I’m not riding him.  This goes more so for Murray than other horses, and it’s not because I think I’m such a fantastic rider that I don’t need a trainer to fix things.  I would be more than happy to have training rides, and if I’m out of the country or injured or something, of course I would put Murray in training so he stays in work.  But if I’m able to ride him, I want to be riding him during training.  In the end, I’m the one who needs to know how to handle my horse and solve problems wit him, and I don’t think that having someone else ride him for a long time does that for me. Murray is smart enough that he knows who he does and doesn’t have to behave for, and I want him to behave and work well for me. 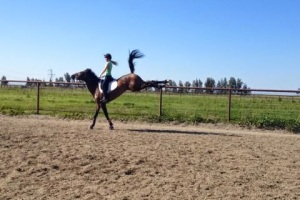 Yep, I actually want to ride through this.

Last but not least: I will not be a tack ho.  What!! What betrayal is this?  A horse-girl who doesn’t want to hoard tack?  You see, I only have one horse, and in my life it’s unlikely that I’ll have more than one or two at a time.  As far as I can forsee, that is.  And honestly, it’s just not my style to keep a bunch of stuff I’m not using around.  I only need two bridles, three at the most, so why would I keep extras…. sure, my horse might outgrow things or need new things, but I’m not going to keep old stuff around just because.  I’ll sell it (to fund the purchase of newer, better things!) or give it to friends or charity. Makes much more sense to me.  And then, all my stuff will be nice and neat and clean.  Now, this doesn’t mean I don’t have one of everything that I need… I just don’t have multiples.

Now, as some others have done, one thing I will do that other riders may not.

I will insist on using positive reinforcement training to get Murray to a place where he’s comfortable with tacking up and for other tricksy fun things.  Negative reinforcement and punishment hasn’t helped him so far — he’s had years of it already — so positive reinforcement it is.  And on the tricks front, well, Murray is a very clever young man and if I can teach him to use his body more correctly at liberty, I’m sure that will translate to riding.  I don’t care how ridiculous it seems, he likes it, I like it, and we have fun!!  And I honestly think it improves our communication and relationship, so why would I not?

Wednesday is normally my jump lesson day, so I often call it Hump Day Jump Day. Alas, lessons were cancelled today for inclement weather — the rain was coming in sideways in the indoor!  Because of this, of course, the sun was shining as soon as I got to the barn and stayed that way for a few hours.  So T and I had ourselves a little pony playdate with Murray (mine) and Connor (hers). 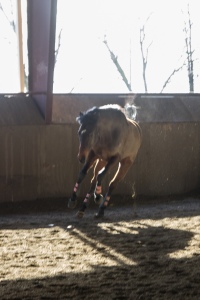 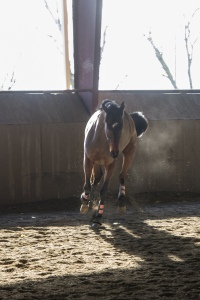 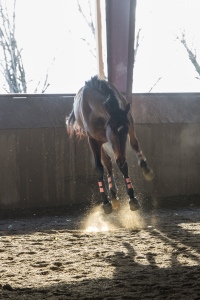 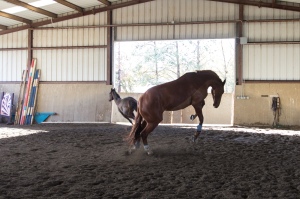 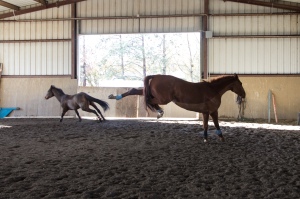 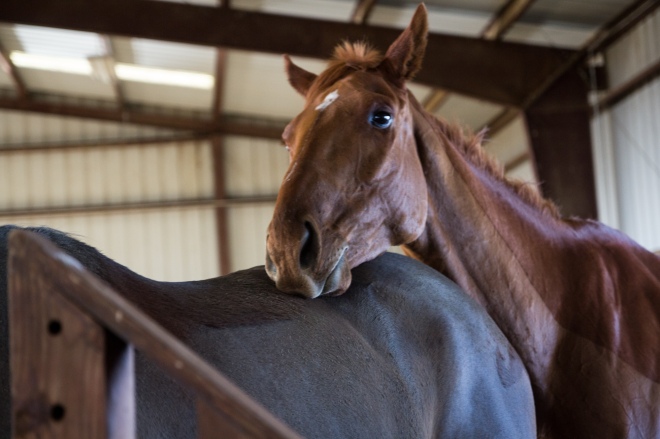 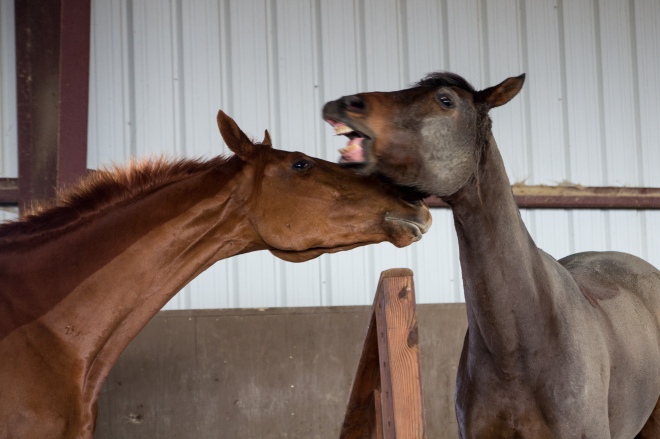 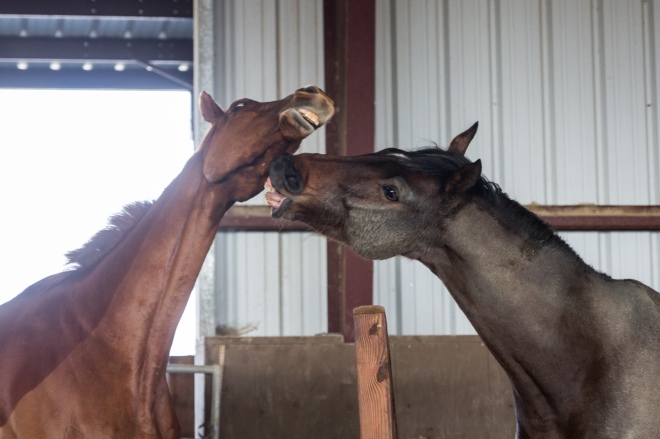 Please ignore that my horse is a filth monster. 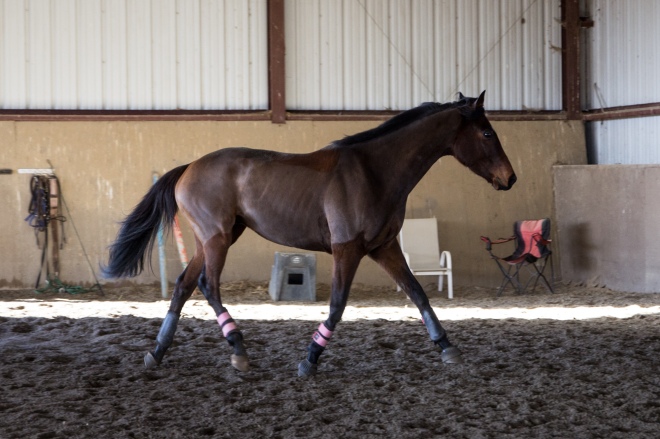 Since I only ever ride the guy and never see him work, I’m fairly terrified that Murray is a hideous mover. Fortunately, he seems pretty cute here! 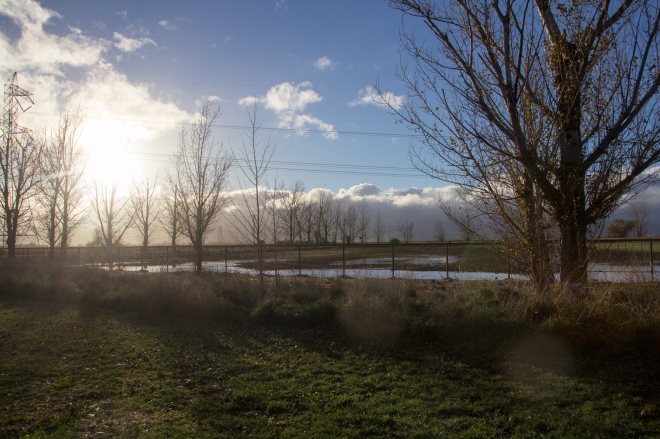 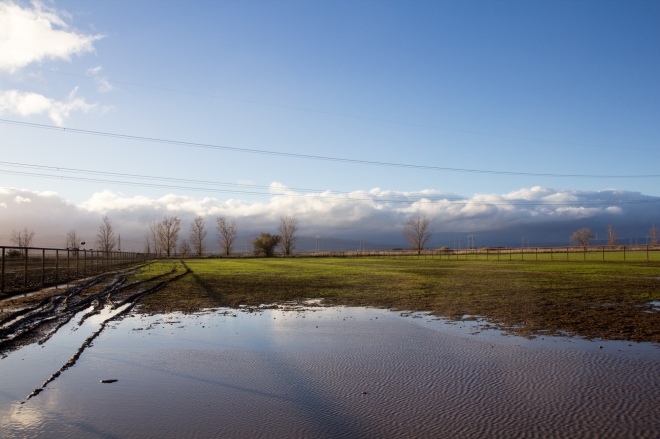 Our barn has become beautiful lakefront property thanks to some much-needed California storms!! 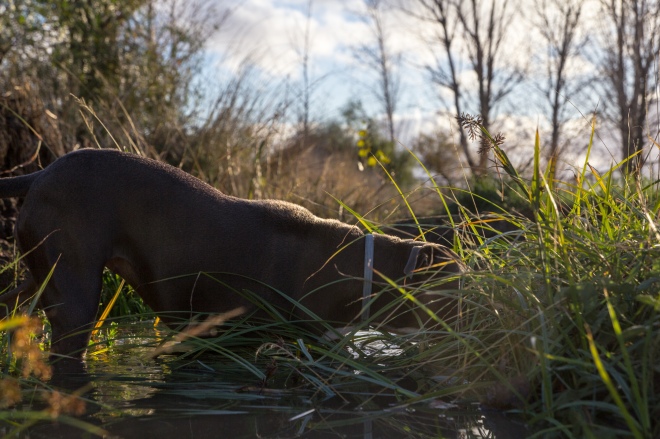 My Ellie Swamp Monster in action in the drainage ditch.